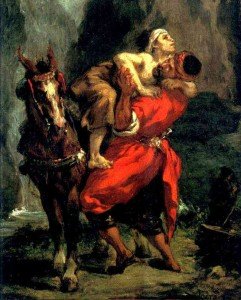 Jesus’ parable of the “Good Samaritan” is one of the best known and loved stories in all of scripture. A careful reading of this account will reveal a very different perspective than what you might have thought was the moral of the story. When you look at the story in a Jewish context, the question that Jesus asked, “Who is my neighbor”, takes on a very different cast.

In verse 25, the man who asked Jesus the original question, was an “expert in the law”. He was probably a member of the Pharisee sect of religious people. This group had a tremendous love and respect for the Torah. The verses he quoted in verse 27 came out of Deuteronomy 6:4-5 and Leviticus 19:18 and was called the “Shema”, which means , “to hear”. It was a set of verses that every Jew knew by heart and was said several times a day. These same verses were quoted by Jesus in Matthew 22:34-40, in response to the question, “which is the greatest commandment”? The significance of the question and the answer is that total devotion to God is demanded.

In Verse 29, the expert tried to throw Jesus a curve by asking, “Who is my neighbor” (as in love your neighbor as yourself)? He was trying to get Jesus to say which of the different classes of people in society that you were required to be friends to. He was saying, “How far do we have to go in this ‘love your neighbor’ business?”. He received a surprising answer from Jesus.

In verses 30-37, it says that the priest and the Levite both walked by on the other side. Who are they and why would they walk by and leave a man who was obviously in trouble? The impression is almost always given that they were an uppity, high brow, hypocritical type of person that had no use or respect for this common man. The reality is, however, much different.

The priests were a very godly, highly respected group of men in Jesus day. There were set apart by God and were totally committed to their priestly duties. They were in charge of the Temple and all the feasts, sacrifices and the rituals associated with them. They had a very strict code of do’s and don’ts given to them by God in Leviticus. These priests served in Jerusalem on a rotational basis. The head of the priests was the High Priest, who represented the whole nation before God. The priests were responsible for interpreting and explaining the Mosaic Laws. They devoted their whole life to the text.

The Levites were also a part of the priesthood and their job was to serve in the Temple. They worked on the Temple grounds and assisted the priests in carrying out the daily business of the Temple. Only Levites and priests could enter the Temple interior. Even Jesus was not allowed to enter the Priest’s court.

The reason the Priest and the Levite went around the beaten man had nothing to do with their personalities, but instead was a matter of the Law, which they had to uphold. The priests, according to Leviticus 21:1-4 and Numbers 19:11-16 (esp. v16), were not allowed to touch any dead body or anything with blood on it because it would make them unclean. In this hypothetical situation, they had to choose between helping the man or breaking God’s Law. It was a tough decision for them, but since they were to be totally devoted to God, they chose to uphold the law. Jesus was trying to point out the mistake the Jews were making of being so intent on the law that they would ignore the correct thing to do. They kept the “letter of the law”, but ignored the “heart and intent of the law”.

How about the Samaritan? What is his significance in this story? To a Jew, they were the most despised and hated of all the races of people. The Samaritans were a pagan, half breed race of people who were placed in the middle of the Promised Land by the hated Assyrians, who had conquered Israel several centuries earlier (See 2 Kings 17:24-40). They brought their pagan religions and practices with them, and in the Jewish mind had polluted a whole section of the country that God had given the Hebrews. Most Jews would not even go through Samaria or speak to them or help them in any way.

Now do you see who the neighbor was? We’ve always been taught that it was the guy in the ditch, help out your neighbor who is in trouble. Be a “Good Samaritan” and help the guy in trouble. That is still a good observation and a moral in the story, however, that is not what Jesus’ point of the story was! Jesus’ real point was that the “Samaritan” was the answer to the question, “Who is my neighbor”? Look how the man answered Jesus ‘question. ‘”which one of the three was a neighbor to the man”? He had to agree that it was the Samaritan, but he couldn’t even bring himself to say the word Samaritan! He just said, “The one who helped him”! The “expert in the law” did not want to have to be nice to a Samaritan and treat him as a neighbor! It killed him to say it! The person, the race, or group of people who are politically different, someone who you despise is also your neighbor. If you are going to love your neighbor as yourself, it applies all the way down to the person you hate the most. Jesus’ parable sure makes these two commandments a lot harder to keep! Who or what group is your Samaritans? Are you able to love that neighbor as yourself? By looking at this story through the eyes of the people that lived during the Bible time period, it sure makes the meaning a lot different than what we taught in this children’s story. It also makes keeping the two commandments that Jesus said were the most important, a lot harder to keep!

« Call Down Fire from Heaven
The Olive Tree: Our Jewish Roots »

One thought on “The Good Samaritan”