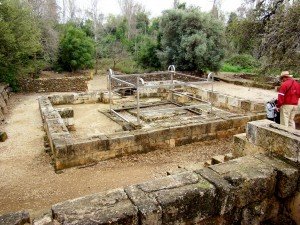 The beginnings of the tribe of Dan are found in Genesis 30:1-6. Jacob, the father of the twelve tribes of Israel, had been unable to conceive a son with his wife Rachel while Jacob’s first wife, Leah, had borne him several sons. Jealous of Leah, Rachel encouraged Jacob to sleep with Bilhah, Rachel’s handmaiden. This relationship produced a son whom they named Dan. The name Dan means , “to judge” or “minister judgment” or “to plead a cause”. Dan was one of Jacob’s twelve sons and became one of the original twelve tribes of Israel. Dan was the second largest tribe – only slightly smaller than Judah. However, they were never thought of as true Israelites because of the circumstances surrounding Dan’s birth.

During the Exodus out of Egypt the tribe of Dan was given the responsibility of guarding the rear flank of the people as they marched (Numbers 2:31). Dan did not do a particularly good job, as the story of the attack of the Amalekites (Exodus 17:8-16 & Deuteronomy 25:17-19) infers. The Amalekites picked off the weak, elderly and helpless that were lagging behind and Dan should have protected them.

Dan was the last tribe in the book of Joshua to receive their allotment of land. Dan’s inheritance was located in the Shephelah, or low foothills between the coastal plain and the Judah mountains. The Philistines lived to the west on the coastal plain and were superior to the Israelites militarily because they had the technology of iron (1 Samuel 13:19-20). They constantly gave the Danites problems. To the east were the allotments for the tribes of Judah and Ephraim and their tribes kept the tribe of Dan from expanding towards their land. God had placed them between a rock and a hard place, with a formidable enemy close by. The story of the most famous Danite, Samson (Judges 13:24), echoes the problems that Dan had with the Philistines. 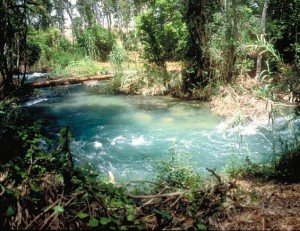 The Banias river as it flows through the territory of Dan

Dan never really liked where God had placed them. When the situation got particularly tough, they decided as a group to look for a better place to live (Judges 18:1-2). Dan sent out five spies who traveled about one hundred miles north to a city called Laish. This was a beautiful lush area, with lots of water and grass. The spies liked this area a lot better than where they were in the Shephelah. They came back to the Danites and told them how great it was and that it would be easy to defeat the people living in Laish. The tribe agreed and sent 600 armed soldiers to capture Laish and take their land. The story of their trip to the north is a bizarre and is found in Judges 18. They stole some cast idols that were household gods and convinced a priest to go with them and set up their own house of worship in their newly captured land. Dan slaughtered the residents of Laish and renamed the city Dan. This became the northernmost location for any of the twelve tribes. They set up a temple there and put the household gods in it, with their new priest to conduct the services. Because of this foolish act, the area and tribe of Dan was always connected with idolatry and was known as a place for cult worship. Dan’s reputation continued to erode (Judges 5:17) because of the seed of idolatry that had been planted in their tribe. Also, now that they lived next door to Tyre and Sidon, where Baal and Asherah worship was most fervent, they began to dabble in that, also. All this led, over time, to the area of Dan becoming the most pagan place in all of Israel. This was where Jeroboam set up the golden calf to worship when the kingdom was divided (1 Kings 12;28-30). Also, Dan was one of Ahab and Jezebel’s royal cities where Baal was worshiped and acknowledged as the main god of the northern tribes. The prophets of Israel harshly criticized the inhabitants of Dan (e.g. Jeremiah 8:16-17 and Amos 8:14) and their transgressions certainly did not go unnoticed by the Bible writers. In the Book of Revelation, Chapter 7, when the remnant of the Tribes of Israel are listed as the ones sealed by God, Dan is left off the list! No longer are they listed as one of the twelve tribes! Also, a tradition developed very early in history, that the anti-Christ would come from the tribe of Dan! The tribe of Dan had sinned against God by leaving the inheritance that had been given them and looking for something better. This decision to change locations ultimately led to their elimination from the tribes of Israel.

Another interesting fact that the Danites did not realize was that this beautiful location that they had picked was the first stop for every marauding army that came through the Promised Land. Dan was destroyed and rebuilt numerous times because every army that sought to conquer Israel destroyed Dan first as they came int the country from the north. Dan had no Israelites neighbors to help them fight, so they suffered greatly by moving to their new location.

What is the moral of the story? You may find a nicer, less stressful place than where God placed you, but if it is not where God wants you, it will not be a better place. We are all tempted to pull up stakes and leave when we are in the middle of a tough situation. “Let’s just move and get a fresh start”, we often say. The grass always looks greener, but it never really is! You need to be where God places you, regardless of how rough the circumstances seem at the time. If you try to run from the lesson He is teaching you it will never turn out easier in the next location. The scenery will be different but there will just be a new set of problems to deal with. This is an especially important lesson for young married couples when the inevitable stresses and challenges come their way. The tribe of Dan teaches us the “grass is always greener” life lesson in a very powerful way. Some tough consequences await the person who bails out early.

« But If Not – The Miracle of Dunkirk
Jesus-A Jewish Rabbi: Part One »

One thought on “The Grass is Always Greener; The Story of the Tribe of Dan”