“…The breaker goes up before them;
They break out, pass through the gate and go out by it.
So their king goes on before them,
And the LORD at their head.”

…From the days of John the Baptist until now the kingdom of heaven suffers violence, and violent men take it by force.

When you read these passages in Matthew, Jesus’ comments on the Kingdom of Heaven seem difficult to comprehend. The Kingdom of Heaven is forcefully advancing (some versions such as the NASB above say violently advancing) and forceful or violent men take hold of it? What does this mean? The key to understanding these passages of scripture spoken by Jesus lies again in the understanding of Hebrew traditions and culture and of the understanding of the Hebrew language, itself. I gained some valuable insight into this hard to understand (in English) passage from Ray VanderLaan and from reading the book,”Understanding the Difficult Words of Jesus“, by David Bivin and Roy Blizzard Jr. When you realize what Jesus was speaking about, the scripture takes on a much clearer meaning.

In these verses, Jesus is talking to the crowd about John the Baptizer and what a great man he is.  Then he says, seemingly out of context, “that since the days of John the Baptist until now the Kingdom of Heaven has been forcefully advancing and forceful men lay hold of it”. The key to understanding these verses lies in two areas. First, the Greek word used for “forcefully” is “biazō” (Strong’s G971), which means to “violently explode”, or blow out”. The Hebrew word that has the same meaning is “perets” (Strong’s H6556 and Strong’s H6557), which is the word we would translate, “dynamite”, or “explode”, or “break out”. 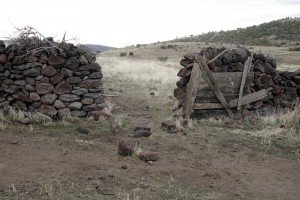 The second key to this passage is a rabbinic interpretation (Midrash) of the Old Testament passage in Micah 2:12-13. This Midrash would have been present during Jesus time and would have been well known to studiers of the Hebrew Scriptures. As you read the Micah passage you will see that it is a Messianic passage that paints a picture of God gathering the remnant of Israel together like a shepherd would pen his sheep in a makeshift corral.  The enclosure is crowded with people, waiting and anxious to get out. The breach maker (verse 13), which is the Hebrew word “perets”, kicks open the gate and the sheep push and shove and “explode” out of the gate, in their eagerness to get out. In the Midrash, the breach maker and the king, later mentioned in verse 13, are two different people. The one who went before and kicked down the gate to start the stampede, was Elijah. The King, who also passes through the gate and leads the flock out of the fold, is the Messiah, the Branch of the Son of David.

Because of Malachi 4:5, the Jews always knew that Elijah had to come first before the Messiah would show up.

If Jesus was referring to this passage of scripture and its interpretation, then some things start to fall into place.  Jesus was saying the Kingdom of Heaven “is breaking forth”, or “breaking out” (exploding) and all the people in this Kingdom are breaking out of their bondage and laying hold of it. The Kingdom of Heaven is breaking forth like dynamite (perets) and individuals are finding liberty and freedom.

Jesus would have also been saying that John the Baptist is the breach maker, the one who kicked down the gate. He is the one who started the movement and is the Elijah of the Midrash of the Micah passage. To add credibility to this line of thinking, Jesus then calls John the Baptist, Elijah in the next verse, in Matthew 11:14. He opened and prepared the way for the King who will follow. Jesus, without having to actually say it, is alluding to the fact that He is that Messiah that the Micah passage talks about! Jesus is the King who will lead the sheep through the gate!

This is such a powerful image! Though Jesus doesn’t directly refer to himself as the shepherd who leads the sheep out, no listener who was in Jesus’ audience could mistake Jesus stunning claim-“I am the Messiah” and John the Baptist is the Elijah who started this whole process of the Kingdom of Heaven starting to break out. The Kingdom of Heaven is here and among you!

Another interesting note is that Jesus has dynamite as part of his DNA! Turn to Genesis 38:27 and read the story of Tamar giving birth to twins. The second baby exploded out of the womb past the first twin, so they named him dynamite (Perez), from the Hebrew word,”perets”! Perez’s father was, of course, Judah, and Perez became the head of the clan of Judah, and an ancestor of David, and ultimately Christ (look it up in Matt 1). Since we have been grafted into the stump of Jesse of the tribe of Judah, we have dynamite in our DNA, also! Where is our passion?  Jesus was not the pussycat of Judah, but the Lion of Judah! It’s in his nature and ours also to be passionate and explosive for the things of the Kingdom! Amen and Hallelujah! Read the Matthew passages again and the complementary passage in Luke16:16 and see if the words don’t jump off the page with Jesus’ claim to be the Messiah that the Jews had been so passionately waiting for!

9 thoughts on “The Kingdom of Heaven is Forcefully Advancing”