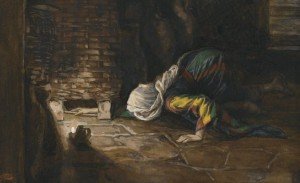 After telling us the story of the shepherd and his lost sheep, Jesus dramatically introduces a second story, this time of a woman and her lost coin. Two questions we will try to answer are, 1.) Why does Jesus tell a story about a woman, and 2.) What are the similarities and differences of this story to the lost sheep story?

First, let us set the story in a cultural background. The story takes place near Capernaum, around the Sea of Galilee. The house that the coin would have been lost in would have been a small, one room, stone structure common to the area, with walls, floors, and ceilings all made out of black basalt rock. The only natural light came from small ventilation slits in the rock walls. With black walls and floors and little light, it is easy to see how a coin could be lost and and a lamp needed to look for it in the dark. The coin named here is a drachma and one drachma would be approximately one days wage. In all likelihood, the woman was married and was trusted by her husband to handle the family money. Similar to the Proverbs 31 woman, she was in charge of the household and an important figure in the Galilean family. 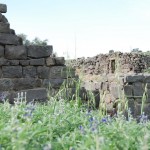 Why did Jesus tell a story about a woman? He certainly could have continued his theme from the previous story and told of a man who lost a coin instead of a woman. One answer is that women were just as important to Jesus as men. Indeed, the whole New Testament is careful to give women a place of equality with men. Jesus had several women among his band of disciples (Luke 8:1-3; Matthew 12:46-50; Luke 10:39) and Luke records in Luke 8:3 that some of the women were actually financing the movement! Jesus definitely had a commitment to communicate with women on as deep a level as men. In this parable, Jesus affirms this commitment by likening himself to a woman who searches for something that has been lost.

The Hebrew Scriptures always characterize God as a person, not just an impersonal force. To show what God is like as a person, the Bible uses metaphors to describe his personality and character. As we discussed in a previous post ( “Our Father”), the Hebrew Testament often portrays God as having female characteristics. From the beginning, in Genesis 1:27 it says that, “God created humankind in his own image…male and female he created them”. Psalm 131, Isaiah 42:13-14 and 66:7-13 are all examples of God having the nurturing and motherly qualities of a woman. It was no coincidence that God likened himself to a good woman as the hero of this story. Just as God (and Jesus) was the good shepherd in the first story, He also becomes the good woman in the story of the lost coin.

What message was Jesus trying to communicate in this story? The lost coin story is similar in most ways to the lost sheep story, but it definitely has some new elements that are put in. As we have just discussed, the hero of the story is a woman and not a man. This parable introduces the element of faulty leadership discussed in our previous post that is found in the Isaiah and Jeremiah sheep stories. The woman is careless and loses the coin as opposed to the lost sheep wandering off on his own. Also, the coin has no ability to find itself. It cannot flip out of the crack or make a cry to help being found. It is all up to the woman and her diligence to find the lost object. The idea of grace is certainly emphasized here as the coin can do nothing to affect the outcome of salvation. The joy of restoration is very present in both stories. Just like the shepherd. the woman and her friends rejoice over finding the lost coin. This is definitely a metaphor for what happens in heaven when a lost sinner is restored. How could the Pharisees and teachers of the law fail to rejoice also?

In this second story of “lost and found”, Jesus adds to the metaphor of what He and His Father are like by introducing the personality of a good woman. In the first story He is a good shepherd and now He becomes a good woman. He wants the listeners to know that He and God have motherly qualities as well as the more obvious male attributes that you would expect from a great teacher. Both His male and female listeners are now intimately involved in His story.

In my next article, we will turn to the final story in the trilogy, which is the climax of the parable, and see the culmination of Jesus’ answer to the question that the Pharisees had as to why He ate with tax collectors and sinners.

« The Story of the Lost Sheep – Luke 15
The Parable of the Prodigal Son: Introduction – Luke 15 »