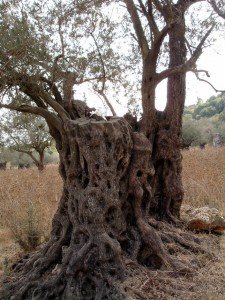 The olive tree is probably the most frequently mentioned plant in the Bible. It was the most important plant in the Jewish culture because it provided so many necessities for their lifestyle. The olive tree was used for its fruit to eat, oil for fuel for their lamps, for medicinal and cosmetic purposes, and ceremonially in their Temple functions for anointing and sacrifices. The wood was also an important fuel supply and was used in construction. The olive tree and the olive oil were considered a major source of wealth from the earliest of times in Israel. Because it was such an important part of their lives, the olive tree was often used by the Scripture writers in imagery to describe or depict various things about the Jewish people and their nation. A closer look at some facts about the olive tree itself, and some Bible passages showing how God used it to symbolize the Jewish nation and the coming Messiah, will provide some valuable insights into understanding the scriptures.

The olive tree thrives throughout Israel. The ability of the tree to grow on rocky hills makes it well suited to grow on the terraced hillsides that make up Israel’s landscape. The tree itself has a huge fat trunk and a relatively small canopy of foliage. It is extremely long lived; some trees are over two thousand years old. They begin to produce olives after 6-10 years of growth.  After an olive tree reaches a certain point in its growth, it won’t produce much fruit, so the tree has to be severely pruned and cut back to the stump. Then, new shoots spring from the stump and it begins to produce fruit again.

All through the Bible, Israel is compared to an olive tree (e.g. Jeremiah 11:16, Hosea 14:6, Psalm 52:8). God was patient with the growing tree; he watered it and dug around it, and expected it to bear fruit. When the tree did not bear the fruit that He expected and instead bore the fruit of worshiping other gods, he cut the tree down (Jeremiah11:17, Psalm 52:8, also Matt 3:10, 7:19). Remember what happened to Israel and Judah when God finally had enough of their rebellion?

Then, out of this stump (Israel), God brought forth a new shoot as described in Isaiah 11:1, “A shoot will come up from the stump of Jesse, from his roots a Branch will bear fruit. The Spirit of the Lord will rest on him”. Jesse, if you remember, was David’s father. What are the roots of this stump of Israel? The roots are the patriarchs of Israel’s lineage; Abraham, Isaac, Jacob, Moses, the faithful forefathers of the Jews, the founders of the people of God. Every Christian finds his spiritual origin in Abraham and the Jewish forefathers. Galatians 3:29 says, “If you belong to Christ, then you are Abraham’s seed and heirs according to the promise”. If the patriarchs are the roots and Israel is the stump, then what is the shoot? The “shoot” was the promised Messiah, Yeshua Hamashich-Jesus! Jesus is the new tree that springs out of its old Jewish roots to start again God’s promise of redemption to his people! The fruit that Jesus would bear would be the fruit of obedience to his Father. To make it even more certain that Jesus was “the Shoot”, Jesus’ home town was Nazareth. The word Nazareth comes from the Hebrew root word, “netzer”, which means, “shoot or branch”. So Jesus, the shoot from the stump of Jesse, was from the town in Israel called “Shootsville”!

Where do we Gentiles fit into this picture? This beautiful picture of God’s people and the Messiah as an olive tree was completed by Paul in Romans 11:17-21. The Gentiles are the wild, uncultivated olive branch that is grafted into the shoot that sprung up from the stump! We now get to share in that nourishing sap from the olive root and we are to bear fruit from that nourishment! It was purely by God’s grace that the wild shoots were allowed to be a part of the tree! Read the rest of these verses; branches were broken off because of their unbelief, and we got to take their place. But we are not to be proud or arrogant about that fact, because if God didn’t spare the natural branches, what will he do to the wild ones that were grafted in?

The images here are powerful for Christians! First of all, although God cut many branches off the Jewish tree, he did not uproot the tree, but left the stump. The shoot of Jesus and the branches of his Gentile followers, grew from a Jewish stump. We have Jewish roots and Jesus is our Jewish branch. Also, the olive tree image is a constant reminder that Jesus is our source of life-He is our branch! From this source of nourishment, we are to bear fruit, fruit that will last (read John 15:16).

5 thoughts on “The Olive Tree: Our Jewish Roots”