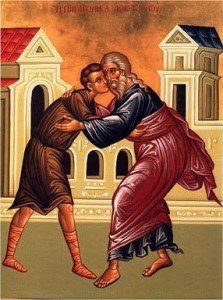 We now turn our attention to the most well known of the the three lost and found stories in Luke 15, the story of the lost or prodigal son. No story in the Bible, or any other sacred literature presents such a dynamic and compassionate picture of our Father. For hundreds of years the Latin tradition has called this story, “Evangelium in Evangelio”, which means the gospel within the gospel. However, as we have mentioned in our past posts, the more familiar a story becomes, the more it takes on its own interpretation and special way of seeing the story develop that then become part of the text itself. The basis used to interpret Bible metaphors comes from the cultural assumptions of the story teller and his audience. Often, their world view is the standard from which conclusions are drawn as to what the Bible writers meant. That is why it is so important to place Bible stories into the culture in which they were originally written. Let’s look at the story of the Lost Son in light of the middle eastern culture in which it was written and see if perhaps there is some different conclusions that surface and some new light to be shed on this wonderful story.

First, we need to identify some problems that seem to exist from a casual comparison of the Lost Son story with the Lost Sheep and Lost Coin stories that precede it in Luke 15. At first glance, the first two stories appear to be in conflict with the third. The parable of the prodigal son appears to have no savior! The prodigal , “came to himself”, in the far country and then went home. If God is the Father in the story, then it would seem that God passively waits for us to return home, but does not go after us like the good shepherd and the good woman went after their lost objects. In the first two stories the finder does all the work. The shepherd leaves the flock and goes after the lost sheep till he finds it. The lost sheep cannot find his own way home. In the same way, the good woman diligently looks for the coin until she finds it. The coin can do nothing to be found on its own. Yet, on his own, the prodigal comes to or finds himself and then heads home from the far country. Could this be correct?

How can this be the gospel within the gospel as has been thought for centuries? Do these three stories conflict with each other? Can we come to God, unaided? Where is the seeker and saver of the lost, the ”word becoming flesh”, the heavy price to be paid, the mediator between God and humans and the savior that make up the “gospel” of the New Testament? More than a casual reading is needed if we are to unlock the hidden manna in this wonderful parable from our Messiah, Jesus. So, let’s get our spades and dig into the word and see what shows up. We will break the story into three parts and look at one part for each lesson. In the first lesson we will look at the, “Request for the Inheritance”; the second, “Returning Home”; and third, “The Banquet and the Older Son”. Then we will try to draw some conclusions. Stay tuned for Part 1 next week.

« The Lost Coin – Luke 15
The Request For the Inheritance: Part 1 of the Study of the Lost Son Parable in Luke 15 »

One thought on “The Parable of the Prodigal Son: Introduction – Luke 15”