First, let’s look from a cultural perspective at the inheritance that the younger son asks for while his father is still alive and seemingly in good health. Evidently, the father was a man of some means and the inheritance would have involved land, animals, slaves, and other personal property. From our modern day, western perspective, the request for the inheritance certainly seems like a selfish request, but not one that is completely out of bounds. We conclude that he is a young lad who is anxious to make his way in the world, albeit too quickly. However, in traditional Middle Eastern Culture, to ask for the inheritance while the father is still in good health would be to say the the son is anxious for his father to die! He would have brought tremendous shame on himself and his family, not to mention the hardship of having to divide up tangible property and the working assets of the family business prematurely. It was a request that should have never been made and one that no middle eastern father would have agreed to. In fact, what the son was asking for would have been deemed foolish and unreasonable in almost any culture.

Any human father would, of course, be expected to refuse his selfish son’s request. Instead, however, the father grants the son’s request. This unbelievably unselfish action elevates the father figure beyond what a human father would do and reshapes the father into a metaphor for God. This father is different from a human father. His love and compassion for his son knows no limits. This request for the early inheritance severs the relationship between the son and his father and only deepens when the son sells the family property. This broken relationship is the key point in the request for the inheritance. 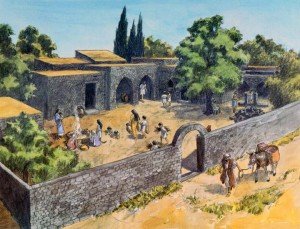 Next, let’s look at the stage on which this story is set. Often, this parable is seen as a story involving only the three main characters and nothing more. It is as if the story takes place on a high hill in total isolation, with only the father and his two sons in the play. However, in Bible times, agricultural land was scarce and family farms were not large. Farmers never lived on their farm land because you wouldn’t want to waste good farm land by building on it. Instead, people lived in small, compact villages called insulas and went out to work on their farms. These insulas were made up of family members and close relatives and everyone knew each other well. Children grew up around their grandpas, grandmas, aunts, uncles, and cousins as well as other neighbors. To understand this story in the proper context, we have to know that it took place in front of a watching community of family, relatives, and neighbors. To further cement this idea, think of the first two stories of the Lost Sheep and the Lost Coin. In both stories the community is called together for a celebration when the lost was found. All these stories took place in community, but in the Lost Son story it is assumed until the very end.

With this knowledge of the facts surrounding the inheritance and the idea that the story takes place in a community, some interesting implications follow. When the young mans asks for his share of the inheritance and obtains it, he moves quickly to sell it off. The text says in Luke 15:13, “Not many days later, the younger son gathered all he had”. The Greek here implies that the son moved quickly and sold his inheritance, split the family farm, turned it into cash, and got out of the village as quickly as possible. By Jewish custom, at this point he would have been threatened to be disowned by the community. A ceremony called Kezazah (cutting off) would be performed if a Jewish boy lost his inheritance to a Gentile and he would not even be allowed to return or have anything to do with the community. The prodigal knows when he leaves that he better come back with all his inheritance money intact or he will face huge public shame and be completely cut off from his family and his past.

To conclude this segment, we have learned how unusual and unthinkable it was for the son to ask for something that would cause so much pain and humiliation for him and his family. We have also learned how impossible and God-like it was for the father to go ahead and grant the request. However, in the process, the relationship between the father and the son was broken and his reputation in the community was damaged. In our next sessions we will look at the young son as he goes to the far country to make his fortune and the events that lead him to return home.

2 thoughts on “The Request For the Inheritance: Part 1 of the Study of the Lost Son Parable in Luke 15”