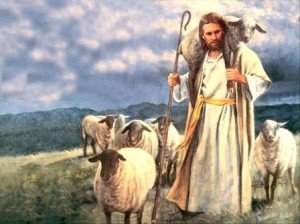 If you will remember in our previous lesson we saw that the three stories found in Luke 15 are really one parable that Jesus told in three parts to explain to the Pharisees why He would eat with sinners. Jesus begins his explanation by telling the story of the good shepherd and his lost sheep. As we study this story, remember that Jesus’ overarching goal is to explain in a systematic manner to the Pharisees and the teachers of the law why he is associating with what the Pharisees called , ”the people of the land”, or the common, unlearned folk.

In this story of the Lost Sheep, Jesus is retelling a classical story already well known to His listeners. This theme of the shepherd and lost sheep was a very common one in the Hebrew Testament. Psalm 23, Jeremiah 23:1-6 and Ezekiel 34:1-31 all have the same characteristics and elements as this lost sheep story. Although we don’t normally think of Psalm 23 in this light, a closer look will show that lost and found is definitely the point of the 23rd Psalm. The key is found in verse 3, where it is translated, “He restoreth my soul”. The Hebrew word that is translated restore is “shuwb” which means to repent or return. Middle Eastern and Arabic translations of this verse have always said, “He brings me back”, or “He causes me to repent”.  If this is understood, then the theme of Psalm 23 becomes the same as Jesus’ parable of the lost sheep. The good shepherd goes out and brings back the lost sheep. The next set of verses in Psalm 23, “He leads me in the paths of righteousness” expand more on that subject. The assumption is that the psalmist was walking in paths of unrighteousness. The good shepherd went after him, picked him up and carried him to the righteous or correct path. The shepherd caused the sheep to repent and return. Psalm 23 also closes with a meal and rejoicing, just like the parable of the lost sheep. The hearers of this lost sheep parable would have been very familiar with this type of story and would have been asking themselves,”Where is he going with this?”, and who is the shepherd, and who is the sheep?

We don’t have the space to fully develop the lost sheep stories in Jeremiah and Ezekiel, but they add an important element that Jesus’ listeners would have picked up on. In these two lost sheep stories, God is mad at the shepherds of Israel because they have neglected and scattered the flock. In both accounts, God says, “I have had it with the way you are treating my sheep, so I am going to come and rescue them myself”. For example, listen to Ezekiel 34:11-16: “Behold I, I myself will search for my sheep and will seek them out….I will bring back the strayed.”

With this background and knowledge of the Bible’s sheep stories, what would the Pharisees have thought when they heard Jesus’ story of the lost sheep, after they had complained about who He was associating with? They would have heard Him say through this parable, “I am God; I am the one that God has sent to rescue His lost sheep, the ones that you have been abusing”! Jesus was saying that He was the fulfillment of God’s promises spelled out in Psalms, Jeremiah and Ezekiel, that He (God himself) would come to His people and personally seek His lost sheep. Jesus would have been saying, “This is who I am and this is the reason that I am doing what I am doing.” There is no question that Jesus was talking about Himself in this parable. As the good shepherd, He is the one that God sent to restore lost sinners to God. Jesus personally paid the great price and made the costly demonstration of love to save the helpless, lost sheep. The joy that was felt in the home of the shepherd was equated to what the joy in heaven would be like when a lost sheep was found.

But Jesus is not finished. After this wonderful story of sheep and shepherd, lost and found, love and redemption, He dramatically introduces a second story of the good woman and the lost coin. Our next lesson will examine this next story in Jesus’ reply to his astute audience of Pharisees and the teachers of the law.