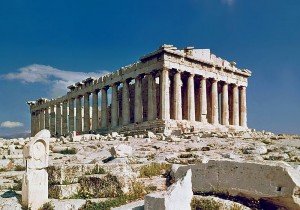 The Parthenon in Athens

On Paul’s second missionary tour, he decided to go alone to the most famous of the ancient Greek cities, Athens. Named after the patron Greek goddess Athena, Athens is one of the world’s oldest cities, with recorded history of over three thousand years. During the time period that Paul would have visited Athens (50-51 CE), it probably had a population of fifty to seventy five thousand people and was home to many of the great Greek thinkers of the day. The city prided itself on being intellectual and had several buildings where the leading men of the city debated the great theological ideas of the time.

The city of Athens was absolutely full of temples to the various Greek gods. An ancient proverb said, “In Athens, there are more Gods than men”. There were temples to at least twelve different gods, plus hordes of statues to lesser deities throughout the city. The main attraction in Athens was the acropolis, the highest point in the city. On top of the acropolis stood one of the most magnificent structures in antiquity, the Parthenon. Already over four hundred years old when Paul would have seen it, it was one of the most famous temples in the world. With a height of over 50′ and 70 beautiful marble columns, it could be seen for miles in every direction. Inside the temple stood a forty foot statue of the goddess Athena.

With this backdrop, Paul began to debate with the Epicurean and Stoic philosophers, trying to convince them that YHVH was the one true God and that his son Jesus had been resurrected from the dead. Paul was taken to a meeting of the Aeropagus, a prestigious council of the elders of Athens. Here, he was asked to present his case to explain to them about this Jewish God and the claim of His resurrected Son. In Acts 17:22, Paul stands up to address the men of the Aeropagus. What follows is one of the most amazing exchanges in all of the Bible. When you read the verses, read them as if a member of the Aeropagus had just asked Paul this question – ”We are not familiar with this particular deity that you talk about sir, tell us again what he is called and where may his temple be found?” Paul then tells them,(paraphrasing) “I perceive that you are very religious here in Athens because I have walked around and seen all the temples and statues to your gods. I even found one that had an inscription to an unknown god. Well let me tell you who this unknown god is….. It is YHVH and He is the one who made the world and everything in it and He’s is much too big to live in a mere temple like these that are made with human hands!”

Then Paul does something in Acts 17:26-28 that really gets their attention. Instead of quoting to them from the Hebrew Scriptures to try to convince them, Paul quotes from their own Greek poets to describe the creator of the universe. He gives lines from two of their well known scholars, Epimenides and Cleanthes to present YHVH as the creator of all, giver of all, and ruler of all nations and all of history. He used their philosopher’s own words to support his claims! Then to sum it up, Paul tells these great intellects that his God is not some object made of gold or marble to look like man’s image, but that He is much bigger than a mere statue and is immortal, invisible, indescribable, and His name is unspeakable! Then Paul tells them that in the past they were ignorant of this and God overlooked it, but now that I am telling you the truth, you must repent! There is a day coming and you will be judged!

What was their reaction? Some sneered at Paul and some said,”We’ll hear more later”. It also says that a few men believed. In all, Paul doesn’t get run out of town like he usually does, but there doesn’t seem to be much evidence of big changes in the hearts of the people of Athens. There is no other written evidence that Paul ever returns to Athens. Paul may be speaking to these same type of people when he wrote to another Greek city in 1 Corinthians 1: 20-31, “Where is the wise man? Where is the scholar? Has not God made foolish the wisdom of the world? We preach Christ crucified, a stumbling block to the Jews and foolishness to the Gentiles”.

« A Walk Through Galatia – Conclusion
Our Stuff: The Story of Acts 19 »

2 thoughts on “The Temple to the Unknown God; Paul in Athens”