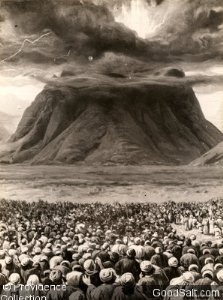 The Feast of Shavuot (pentēkostē in Greek, Pentecost in English), one of the three great pilgrim Feasts that God told the Jewish people to celebrate (Deuteronomy 16:16),  occurs fifty days after the Feast of Pesach (Passover). This holiday, described in Leviticus 23:15-22, was primarily an agricultural festival and celebrated the end of the barley harvest and the beginning of the wheat harvest. However, very early in Jewish history, it also took on an even greater significance. The Rabbis determined that the timing of the Feast of Shavuot coincided with the great event in Jewish History of God giving His Torah to Moses on Mt. Sinai. The Israelites left Egypt on the fifteenth day of the first month, the morning after the sacrifice of the Passover Lamb. They arrived at the foot of Mt. Sinai on the fist day of the third month (Exodus 19:1), which would have been approx 40 days. Moses then went up on Mt. Sinai and stayed there several days and then brought back down the two tablets written on stone by the finger of God. This total time-line closely approximated the fifty days after Passover that the Feast of Shavuot was supposed to be held on.

Since Passover was an Exodus related feast as was Sukkot in the fall, the Jewish sages concurred that Shavuot must be Exodus related as well and was to celebrate the occasion in which God revealed Himself to His people and made a covenant with them by giving them His written instructions on how to live (Torah). Why is this of significance to Christians today? The great event described in Acts 2 in the New Testament, when the Holy Spirit appeared and rested as tongues of fire on individual believers, occurred on the Feast of Shavuot (Pentecost)! The same day that the Jews were celebrating God’s giving of His Torah on tablets of stone, the Holy Spirit came and wrote His Torah on people’s hearts! This confirmed God’s promise in Jeremiah 31:31-34 and was the promise from the Father that Jesus had told His disciples about in Acts 1:4. A look at these two seminal events in Bible history will reveal some remarkable parallels and similarities and will increase your faith in the awesome God of the Bible! God had planned the Acts 2 events even from the time of the Exodus and then He brought them to pass in the framework of the Jewish Feasts that had been set up 1200 years prior. While this is certainly not an exhaustive list, here are some amazing parallels between these two events that happened 1200 years apart, to the day!

Think about these parallels! Wouldn’t they have been powerful to the Jewish people that would have been there to celebrate this time long ago when God showed up in fire, wind, smoke and voices?  Suddenly, it looks like God is showing up again in the same way that He came before! They see fire and smoke and hear voices and the place is shaking violently! God is back! What is He telling us?

Looking at the history of Shavuot and what God did there makes the story of Acts so much deeper and increases our faith in the God of the Bible. His plans for us were made since the beginning of time and are exact down to the last detail. What a mighty God we serve!

« Why Do We Bless Our Food?
Tower of Babel Reversed! »

32 thoughts on “The Many Parallels of Sinai and Pentecost”