In the story of the Exodus, the Israelites are faced with three tests starting in Exodus 15:22-27. 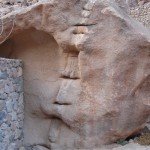 Water from the rock

Now, fast forward to Jesus. How many tests, did he incur and where did those tests occur? Three in the wilderness. The first similarity that you catch is that Moses in Deuteronomy 9:9 says. “When I went up on the mountain to receive the tablets of stone, the tablets of the covenant that the LORD had made with you, I stayed on the mountain forty days and forty nights; I ate no bread and drank no water.” Jesus follows Moses’ example by going up on the mountain and eating nothing for 40 days and nights.

When the devil tries to test Jesus, when he knew he was hungry, by telling him to turn the stones into bread, Jesus quotes the Deuteronomy 8 passage where it says that God caused the Israelites to hunger and then fed them with manna, so that they would know that man does not live by bread alone.

In Luke, Jesus’ second test comes as the devil leads Him up to a high place and shows Him all the kingdoms of the world and says. “I’ll give it all to you if you will worship me.” Jesus again quotes Deuteronomy, this time 6:13: “Fear the LORD your God, serve him only and take your oaths in his name.”

In the third test, the devil told Jesus, if you are the son of God, throw yourself down and God will save you. Jesus again quotes Deuteronomy 6:16, which says don’t put the Lord your God to the test. Don’t test God’s faithfulness like the Israelites did in their third test at Massah and Meribah. They were saying “God give us a miracle!” God gave us a miracle, his son died for us.

The similarities in the Exodus test, and Jesus’ tests are very evident. And you know a Jewish mind would immediately go back to Deuteronomy 8 when they heard what Jesus did. Matthew’s order of the three tests swaps numbers two and three and RVL suggests that Matthew changed the order to correspond to the Shema – love the Lord your God with all your heart (food, sustenance), all your soul (gave his son, gave all), all your might (could have had all power and might but rejected it). Jesus faced those three tests continually – all your heart, all your soul, all your might.