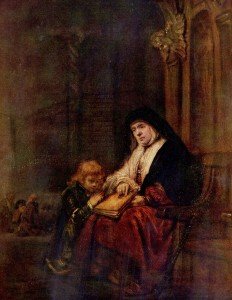 Rembrandt's Timothy and his grandmother

In our first two lessons on Timothy we did a biographical sketch of his life and background to try to determine what made Paul pick him as one of his disciples. Although Timothy was an unlikely candidate to be a disciple because of his heritage and the surroundings he was brought up in, he nevertheless became not only a disciple of Paul, but one of the great pillars of the Christian faith. Once Timothy left his home and family in Lystra to follow Paul, what happened to him? Where did he go and what did he do in the succeeding years? The New Testament Scriptures give us some fascinating snapshots as to what life was like for this young man from nowhere as he followed his rabbi, Paul to the ends of the earth, making disciples in the name of his Messiah, Jesus.

Immediately after leaving his hometown of Lystra and the province of Galatia in which he grew up, Timothy went with Paul to Macedonia and Achaia (Acts 17: 14-15 and Acts 18:5). From what we can tell from Scripture he was with Paul for all of his second missionary journey as they went on to Philippi, Thessalonica, Athens, Corinth, and Ephesus (Acts 17 and 18). When Paul took his third missionary journey, Timothy went with him as his aide. He stayed for most of the two and one half years that Paul was in Ephesus (Acts 19:22). Timothy then traveled again with Paul to Corinth, back to Macedonia, Philippi, and back to Asia Minor (Acts 20:1-6).

When Paul was first imprisoned in Rome, Timothy was there as his friend (Philippians 1:1, Colossians 1:1, and Philemon 1:1). These epistles written to these cities were all penned while Paul was in prison in Rome. After Paul was released from prison, Timothy again traveled with Paul. At Paul’s request, he stayed in Ephesus to lead the church there (1 Timothy 1:3). Church tradition says Timothy later became the bishop of the church in Ephesus.

Timothy was the co-sender of six of Paul’s letters to the New Testament churches. Listen to the admiration of Paul for Timothy in Philippians 2:19-22:

I hope in the Lord Jesus to send Timothy to you soon, that I also may be cheered when I receive news about you. I have no one else like him, who will show genuine concern for your welfare. For everyone looks out for their own interests, not those of Jesus Christ. But you know that Timothy has proved himself, because as a son with his father he has served with me in the work of the gospel.

At the end of his life Paul asks Timothy to join him in Rome (2 Timothy 4:9 and 2 Timothy 4:21) because he wants to see him before he dies. Like his rabbi, Timothy is also put into prison for his beliefs and his association with Paul (Hebrew 13:23). All this is not a bad resume for a backwoods boy from Lystra who was dealt a bad hand early in life. He was told that he was a “momzer”, an outcast, and that he had no chance to do anything in life. But, he had a belief in Jesus as the Messiah and God chose him to be one of his disciples. If God can use Timothy, he can use each one of us. We are all without excuse. All it takes is a fire in the chest and a willingness to try to be like our rabbi.

If not now, when?