In our previous post, we discussed Rosh Hoshanah, the first great day in the season of the Jewish High Holy Days. Rosh Hashanah occurs on the first day of the seventh month in the Jewish calendar which corresponds to September 5th, 2013 on our calendar (last week). It is called the Feast of Trumpets because trumpets are sounded on that day to herald or announce the events of the next feast to come. That next feast to come is Yom Kippur and it occurs on the tenth day of the same month, which is our Sept 14. This holiday was instituted by God in the book of Leviticus:

The Lord said to Moses, “The tenth day of this seventh month is the Day of Atonement. Hold a sacred assembly and deny yourselves, and present a food offering to the Lord. Do not do any work on that day, because it is the Day of Atonement, when atonement is made for you before the Lord your God. Those who do not deny themselves on that day must be cut off from their people. I will destroy from among their people anyone who does any work on that day. You shall do no work at all. This is to be a lasting ordinance for the generations to come, wherever you live. It is a day of Sabbath rest for you, and you must deny yourselves. From the evening of the ninth day of the month until the following evening you are to observe your Sabbath.”
– Leviticus 23:26-32

Then he is to take the two goats and present them before the Lord at the entrance to the tent of meeting. He is to cast lots for the two goats—one lot for the Lord and the other for the scapegoat. Aaron shall bring the goat whose lot falls to the Lord and sacrifice it for a sin offering. But the goat chosen by lot as the scapegoat shall be presented alive before the Lord to be used for making atonement by sending it into the wilderness as a scapegoat…because on this day atonement will be made for you, to cleanse you. Then, before the Lord, you will be clean from all your sins. It is a day of Sabbath rest, and you must deny yourselves; it is a lasting ordinance. The priest who is anointed and ordained to succeed his father as high priest is to make atonement. He is to put on the sacred linen garments and make atonement for the Most Holy Place, for the tent of meeting and the altar, and for the priests and all the members of the community. 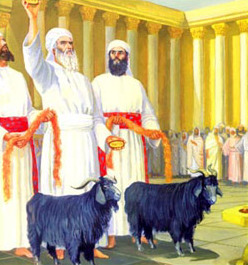 Yom Kippur, also called the Day of Atonement, is the most important of all the holidays in the Jewish year. Many secular Jews who do not normally observe other Jewish customs will refrain from work, fast, and attend synagogue services on this day. It is a day set aside for the modern Jew to try to amend past behaviors and ask for forgiveness for wrongs that have been done against God and against other human beings. The entire twenty four hour period is spent fasting and much time is spent in the synagogue petitioning God and confessing sins. At the end of Yom Kippur, one hopes that the soul has been humbled and that they have been forgiven by God. The purpose of this special day is for the Jewish believer to prepare for judgment, pray for forgiveness, reconcile themselves with their family, neighbors, and with God, and to purify themselves from sin and error. For the modern Jewish person, Rosh Hashanah, and Yom Kippur are the time for a new beginning.

In contrast, the observance of Yom Kippur in Bible times was not as much of an individual focus as it was a priestly institution. As seen in the Leviticus passages, Yom Kippur rites were performed only in the sanctuary by the High Priest on this one day of the year. Individuals only observed the priestly ordinances and did not participate in any way in the process of the Feast liturgy. The evening of the Day of Atonement begins with the blast of the (shofar) trumpet. This will be the last time the shofar is heard until next year. When the actual day of the feast begins, the high priest will put on special linen garments and enter the holy sanctuary. The priest will begin by making offerings to cleanse the temple and the altar. Then he will make atonement for himself and the rest of the priests. Lastly, the priest will make atonement for the rest of the people.

Before the destruction of the Temple, the atonement that was made for the people involved two goats. By casting lots, the priest chose between the two goats. One was chosen for the Lord and the other, called “azazel”, was the scapegoat. The first animal was sacrificed to God and the blood sprinkled on the altar to pay the penalty for the people’s sins. Then the priest, in the second part of the ceremony, transferred the sins of the people onto the second goat and then it was driven outside the camp and into the wilderness to take the sins away from the camp. To the Jews, these two animals were each considered half of a single sacrifice. For this reason they selected two goats that looked as much alike as possible. The picture was for Israel’s sins to first be forgiven and then taken away and cast into the abyss to await the final judgment.

To the Christian who believes in the sacrificial death of God’s son Jesus, the symbolism is huge. Jesus was the lamb of God that paid once for all our sins (Hebrew 10 – especially Hebrews 10:14 and Hebrews 10:19). Jesus is also the scapegoat because the Lord laid on Him the iniquity of us all (Isaiah 53:6-7) and He was led outside of the camp to die in disgrace for us (Hebrews 13:12-13). Christ is the way that God chose to atone (let us be at-one-with God) for our transgressions. Also, Jesus was our High Priest, the one that made the atonement of our sin once and for all (Hebrew 7:24, Hebrew 7:27).

Even though we are not Jewish, we can certainly proclaim that Yom Kippur is a great day to celebrate – that day when God atoned for our sins by sending His only son Jesus to be sacrificed in our place. Because of this great sacrifice our sins will be remembered no more!

One thought on “Yom Kippur and the Days of Awe”