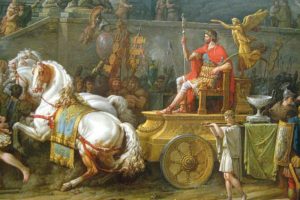 The word “Advent” (coming, or arrival of a notable event or person) is not a word that is in common usage in twenty-first century English. For those people in the more liturgical Christian denominations, they know the word is used for the four-week Advent season that leads up to the day of Christmas and the birth of the Christ child. For the rest of the church, it is not even a word that is familiar or often used. Where did the word come from and what did the early believers hear when they heard the term? A look back to the origin of the word and the customs surrounding it will give us an unbelievable picture of what the early believers were thinking when they heard this term used to describe the coming of their Savior, Jesus, the Christ.

“Advent” is derived from the Latin word “Adventus” (Greek: parousia). During the time of the Roman domination of the world, “Adventus” was a term reserved almost exclusively for the Roman Caesars. Adventus was a ceremony in which a Caesar was formally and ceremonially welcomed into a city. When the ruling Caesar won a military campaign or when a city was dedicated to a Caesar or another Roman God’s divinity, an Advent celebration was held in that city to confirm their deity and give them great honor and adulation. These ceremonies were not only held in Rome, but in many of the great conquered cities in the Roman Empire. All the major cities under Roman control were in competition with each other for the prestige to be known as the ”neokoros” – the protector and center of worship for a Roman deity, or the Roman Emperor that was in power. A great example of this is the city of Ephesus where Paul stayed for three years and the church to whom he wrote the book of Ephesians (also see the story of Paul in Ephesus in Acts:19 and Acts:20). At that time, Ephesus was not only the neokoros for the goddess Artemis, but also the neokoros for the Flavian family of emperors: Vespasian, Titus and Domitian.

To honor these great emperors and confer deity upon them, huge ceremonies were held in these Roman cities. Tremendous effort would go into sprucing up the city and completing building projects for statues and temples to commemorate these Adventus celebrations. Once the time had arrived and the city was ready, Caesar would take a huge entourage from Rome, complete with the Praetorian guard and several legions of troops, to travel to the place that was going to honor him. This huge assembly of royalty and troops could be seen for miles as they approached the city. Caesar would be mounted on a magnificent white horse and in full battle armor. Word would spread throughout the city that Caesar had arrived and was just outside the city gates. All the city dignitaries would lead the townspeople outside the city gate to meet and welcome the honored guest and his assembly. They would form a circle around the coming King and bow before him. They would honor him with words and proclamations and then welcome him into the city to see the new statues and temples that were built to deify their king. The entire procession would then march back into the city and the Advent celebration would begin. This huge event would last for several days and no expense would be spared to honor their deified “King of Kings” and “Lord of Lords”.

With this background in your mind, now try and picture the word ”Advent” and imagine the coming of our “King of Kings” as it is described in the Book of Revelation and in other places in scripture. Doesn’t it make the thought of his second coming feel so much more real and powerful? At Christmas time, we not only celebrate Jesus’ first Advent as a baby, but also his Second Advent when He will come again as a conqueror in all His power and glory. During this second Advent, Jesus will come, with the armies of heaven, riding on a white horse (Revelation 19:11-16) and Christians will fall before and acknowledge Him. He will lead us into the new heavenly city where we will worship and praise Him for eternity (Revelation 21 and 22). What a cataclysmic and earth-changing event this will be! In light of the historical background for Advent, shouldn’t the Christian church make a bigger attempt to recover the meaning and awesomeness of the Advent season?

P.S. Read 1 Thessalonians 4:13-18 and see if you don’t notice an Advent in Paul’s description of Christ’s returning.

« Before the Rooster Crows
The Lineage of Jesus: Miraculous Preservation of the Messianic Line »