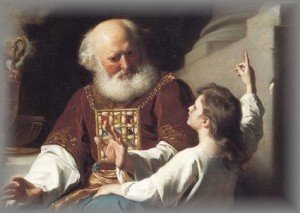 We are all familiar with and love the story found in 1 Samuel Chapter 3, of God calling the young man Samuel to be his chosen servant. While sleeping in the Holy Place in the Tabernacle, young Samuel heard the voice of God calling on two separate occasions. Finally, the Lord calls his name twice,”Samuel! Samuel!” Samuel answers, “Here I am Lord, Speak, for your servant is listening”. Could it be possible that Samuel knew the Torah and knew that something special was about to happen to him? Do you think he knew the story in Genesis 22:11 where Abraham was about to sacrifice Isaac, and God also called to him twice, saying, “Abraham! Abraham!” Abraham also answered, “Here I am Lord”! Perhaps did Samuel also think of the story in Genesis 46:2 when God called to Jacob, “Jacob! Jacob!” and Jacob replied, “Here I am!” God told Jacob not to be afraid to go down to Egypt and that God would make a great nation out of his offspring. And, I’m sure he knew the story in Exodus Chapter 3:3 when God called to Moses out of the burning bush-“Moses! Moses! Moses replied, “Here I am!” God then told Moses that he would be his feet and mouthpiece to free the enslaved Israelites from captivity. Don’t you know that Samuel’s heart raced when he realized that it was God that had called his name twice? He knew that God had something big in store for him and he knew how to answer, “Here I am, your servant is listening!”

Now, let’s fast forward to the New Testament and the story of Saul of Tarsus, as he is heading to Damascus to arrest some followers of “The Way”.  You know the story; God knocks Saul down and blinds him, then calls his name out twice, “Saul, Saul”! Saul was a devout student of the text and he knew what was coming next. If God calls your name twice, He is going to have a big job waiting for you!

All these servants of God responded in the right way. They were willing to do whatever the God of Israel asked them to do. And they ended up being some of the greatest pillars of the Hebrew nation.  What will we (I) do if God calls our name twice for some big job in the Kingdom? Will we be willing to do whatever He says and go where He says go? Here am I Lord, Your servant is listening!!

« Samson; Confronting Evil
Manna Story and the Garden of Eden »

9 thoughts on “When God Calls Your Name – Twice!”