Another little interesting chapter in our misunderstanding of the setting of the Christmas story is found in our perception of the wise men. This story, only found in the book of Matthew, is one that is seemingly familiar to all Christians. However, when you really look into the story culturally and historically, it is amazing to see how may misconceptions surround this event. Let’s do a careful reading and look at several things we thought we knew about the wise men and discover what the facts really are. 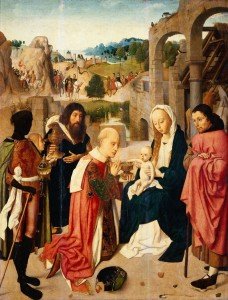 Adoration of the Magi by Geertgen tot Sint Jans

All of these differences surrounding the Nativity Story were very revealing to me because I realized that I had let someone else explain God’s word to me. A careful study exposed some interesting facts that were different than I had been taught. None of these facts really change the meaning of the story, but it definitely helps give you a better mental picture of the story as it probably played out. Next Christmas season try to remember some of these new mental pictures as you celebrate the birth of our Savior.

2 thoughts on “The Wise Men and the Star”