“And she gave birth to her first born, a son. She wrapped him in cloths and placed him in a manger because there was no room for them in the inn.” – Luke 2:7

When we get to this part of the Christmas Story, we have a vision of Joseph and Mary pulling in on their donkey to a motel after dark and finding the “No Vacancy“ sign already on. Joseph goes inside and presses the bell, but the innkeeper comes out and gruffly says, “We got no rooms!”

The problem with this mental picture is that the English translation of the phrase “no room in the inn”, has taken on the meaning that there was an inn that had a number of rooms that were already occupied. The Greek words that are used here do not refer to rooms in an inn, but refers to space (topos) in an area, as in “there is no more space on my counter for another appliance”. Instead of no room, there was no space in the “katalyma” (Strong’s 2646) or the word translated in this verse as “inn”. However, this is not the ordinary word used for a commercial inn. In the parable of the Good Samaritan, also occurring in Luke (Luke 10:25-37), the Samaritan takes the wounded man to an inn. The Greek word that Luke uses here is, “pandocheion” (Strong’s 3829). The first part of this word means, “all” and the second part means, “receive”. The pandocheion is the place that receives all and is a commercial inn or motel. So, if Luke wanted his reader to think that Joseph and Mary were turned away from an inn, why didn’t he use this same word that he used later on in his Gospel? What does “katalyma” mean? It simply means, “a place to stay” and can refer to many types of shelters. The three that are options for this story are inn, house, or guest room. Luke’s choice is guest room because he uses this same word, ”katalyma” on another occasion in Luke Chapter 22 when he describes the story of the upper room. The room the disciples were to eat the Passover meal (Luke uses “katalyma”) was a guest room in a private home. This makes perfect sense when you put it back into the birth story. Luke is telling his readers that Jesus was placed in a manger because in that home the guest room was already full. 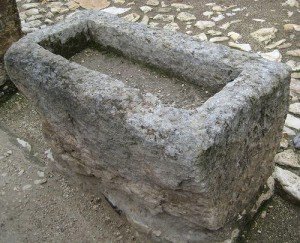 This leads to the next question: what and where was the manger? Westerners always think of a manger as a stable or barn that is separate from the sleeping quarters of the home. In reality, at this time in the Middle East, homes were simple two room structures containing a family room and an attached guest room. Some dwellings were simply caves that had been walled in and expanded into two-room homes. At night, some of the family’s animals were taken into the family room part of the house. The place where the animals stayed was in a step-down area close to the main entrance. A manger was made of stone (not wood) and was either carved into the floor of the house or brought into the house where the animals were kept and was used for their feed and water (see picture). A manger in the Middle East is a feed and water trough made of stone.

To summarize, what Luke tells us about the birth of Jesus is that Joseph and Mary traveled to Bethlehem, where they were received into an ordinary peasant home and were graciously allowed to stay in the part of the house where the host family stayed with their animals. Their guest room was already occupied. Fitting with early Christian tradition, the home could have even been an expanded cave. When Mary gave birth, she wrapped her newborn son and put him in a stone manger and covered him with a blanket. It would have been a humble, yet loving environment for the birth of the baby Jesus.

« The Christmas Story: Part 1 Joseph, Mary and the Imminent Birth
Shepherds in the Field »

3 thoughts on “No Room in the Inn”